Using a Matrix Grid in Your Surveys to Elicit Better Responses

One hallmark of outstanding customer service is the speed at which a business responds. If you have thought of Sogolytics purely as a data-gathering tool for trend analysis, it may not have occurred to you to use the software as a tool to improve the relationship with your customers.

Most people who are new to designing surveys start out by using only a few question-types: drop-down lists; radio buttons; open-ended text boxes; and perhaps a rating or ranking scale. In many cases, those really are all you need for a simple survey.

However, other question types have a lot of advantages, too. Among the most powerful is the matrix grid. New survey designers sometimes aren’t sure how to use these, or why they should bother.

This question type is worth learning about if you need to ask several related questions with the same response sets. With a matrix grid, you present the participant with a series of items (usually in rows), sharing a common set of response options (usually in columns), asking one or more questions about each item. Because matrix grids group questions logically, they can clue-in respondents that you’re asking them to share opinions from a similar mindset. They also have advantages for you, as survey designer and data analyst.

Let’s say you’re soliciting feedback after a company event, such as a sales conference that had a dozen break-out sessions. You could ask a series of similar questions where only the session name varies:

In this case, the respondent has to pay attention to both the topic of the question (“oh, right, that breakout session!”) and what you’re asking her to rate (its value). And she has to pay close attention to every question, since you might ask for different feedback on each session (e.g. “was the session too long, too short…?”).

Even in its simplest form, a matrix grid is easier to understand, since it’s obvious to the respondent that the same scale applies to all the items listed.

The matrix grid shrinks the survey visually, particularly once you get past three or four items. Anything that prevents a respondent from saying, “Enough, already! I’m tired of answering so many questions!” is helpful.

Note: Don’t use that power as an excuse to list 30 items. When you do so, otherwise-thoughtful respondents stop paying attention to each item, and they choose one answer for the whole long list. (“Satisfied, satisfied, satisfied…”) Try to limit the number of items in a feedback survey to five to ten items.

A matrix grid also saves you time in question construction, which is a nice extra. You supply the list-of-items and the list-of-answers just once, rather than investing time in copy-and-paste.

In addition, a matrix grid gives you additional control over survey flow. For instance, you can instruct Sogolytics to rotate or randomize the order in which the items are presented. This way, people don’t “vote” for the first three candidates they see on a list – or if they do do so, at least you know everyone is seeing a different set of people presented at the top of the list. 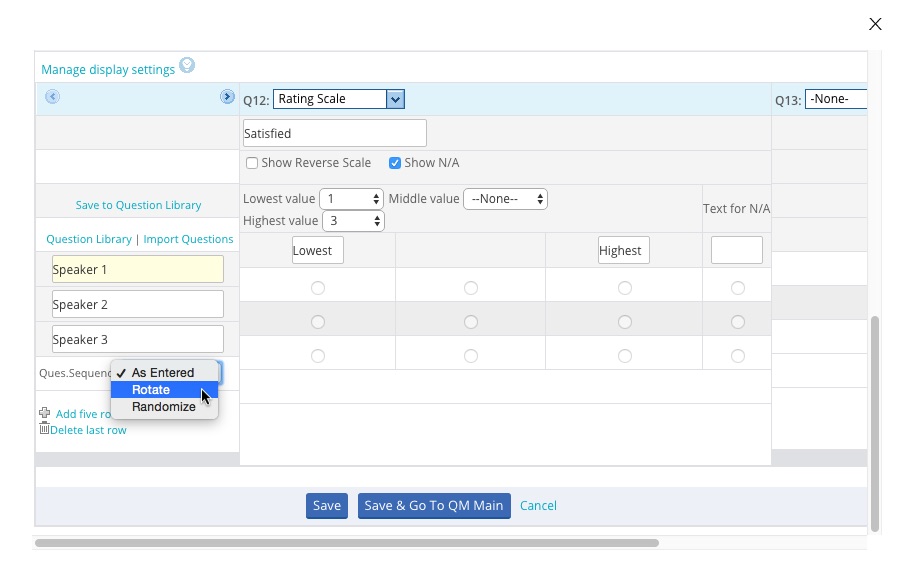 Exploring the power of matrix grids

The most common way to use a matrix grid is to apply rating or ranking scales to each of several (usually related) items, such as, “How important are each of these hotel amenities?”

But a matrix grid can use any of these question types:

You gain more options than may be immediately apparent. For example, matrix grids you let solicit open-ended input, such as, “When you think about beer, which brands come to mind?”

And, of course, these question types can be used like any others in Sogolytics, such as with Rules and Alerts or data pre-population.

Matrix grids become even more powerful when you add more questions to a matrix grid. Sogolytics permits seven different questions for each row. So, for example, you can use a matrix grid to create a team travel schedule, an expense report, or an element in a job application form.

It’s especially useful for “follow-on” questions. Let’s say you gave respondents a list of possible new ice-cream flavors. After getting a rating for each flavor, you could ask the respondent to rank her preferences, or choose a checkbox, “If we added only one of these, which should it be?”

Several of the question types supported in matrix grids have settings that let you fine-tune the visual presentation. For example, the checkbox option permits you to show the choices standalone… 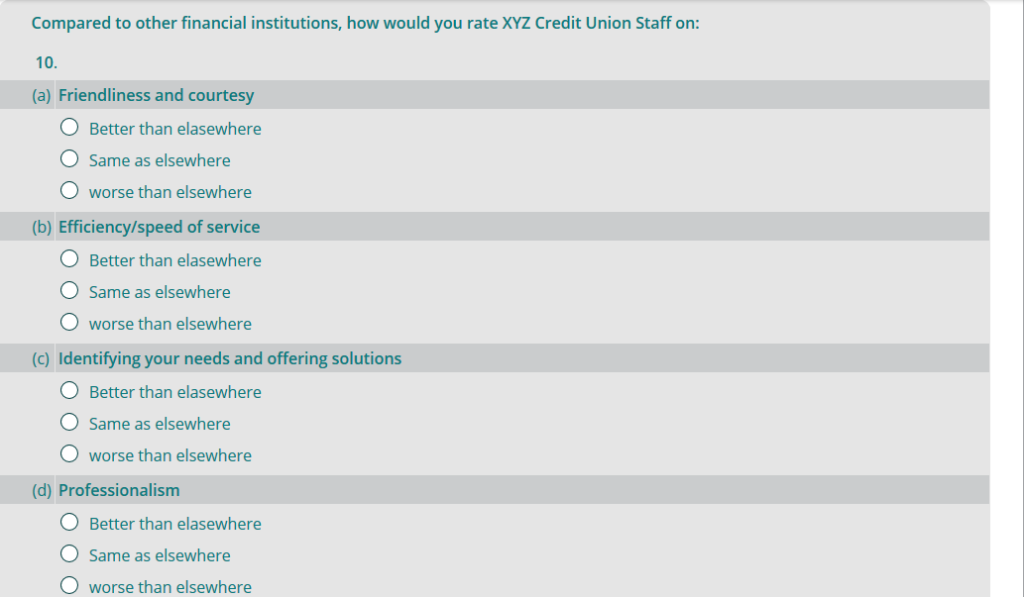 Even more power using the Intellimatrix

One Sogolytics matrix grid feature we’re very proud of is the Intellimatrix; it’s something we feel sets us apart. In short, the Intellimatrix lets you enable or disable matrix questions based on respondents’ answers.

To continue the earlier ice cream example, imagine that we don’t want to permit someone who ranked a flavor “no way” to choose one of those flavors as her top choice. (Not a very realistic example, I admit, but let’s pretend it matters.) The Sogolytics branching lets you create conditions and, if they’re met, activate options in the rest of the matrix grid.

So, as this survey preview shows, a respondent who dislikes the idea of a cardamom-ginger ice cream isn’t even given the option to choose that flavor.

This is just a sample of the power of survey matrix grids. You can accomplish much more!

Ready to get started? Learn more about Sogolytics today!